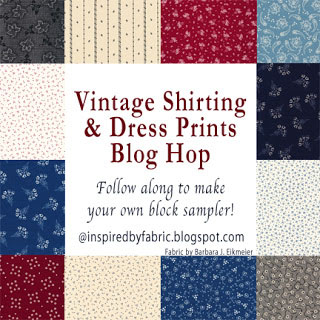 It's my turn to play with Barb's great fabrics, and what fun it has been. For those of you who may know this as a travel blog, bear with me! 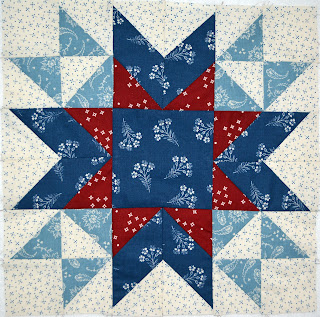 As a star lover, and a native of Pennsylvania's Wyoming Valley, how could I not love the Wyoming Valley Star! This block has stars inside stars, and stars set on more stars (those corner units form their own star). So it has to be my choice for this special Blog hop.

But let me tell you a little about Barb and me!  We met in a quilting class while we were both living in Hawaii, and became friends almost immediately.  Both our husbands were in the military, so we had that in common as well. One of my favorite memories of those years was our Friday night dance classes.  It was just the four of us taking lessons from Miss Sylvia, and we had a lot of fun during those classes (and when we went for dessert afterwards!). Later on, when I needed help with writing a book, Barb was right there to become co-author of Traditional Quilts with Painless Borders. Now we enjoy each other's company every year at our annual retreat with several other quilting friends. This is a friendship that has spanned many years and many locations, but quilting remains the constant.

This quilt block appears in several of my books, most recently in Savvy Sets for Scrappy Blocks, and I'll be giving away a copy of that book to one lucky winner. It's also a good place to show off a method I have of making 2 ½" half-square triangles from 2 ½" strips with no waste. 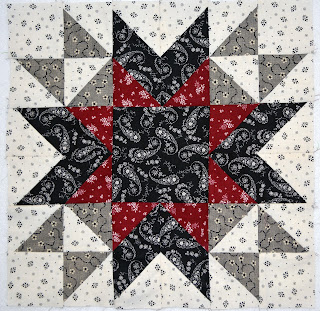 My first step in making one of the blocks is to audition the fabrics in the order that I will be using them. There are three parts – the large star made of chevrons, the small inner Sawtooth star, and the star that is formed by the corner units.  I call that one a "sitter backer" star, because it is not prominent, it just kind of sits back there. I arrange the fabrics so that the sawtooth star fabric is between the large star and sitter backer star, then have a good look at them, perhaps squinting at them, to make sure that there is good contrast. 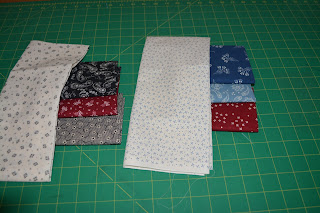 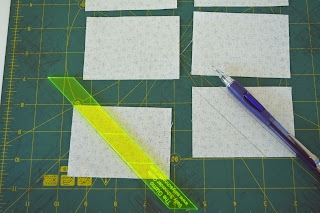 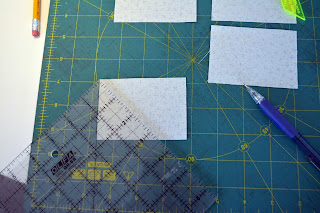 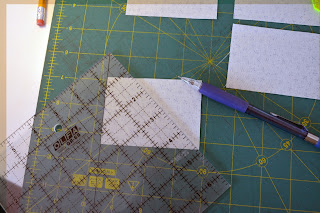 Using a standard ruler with a  45o line. 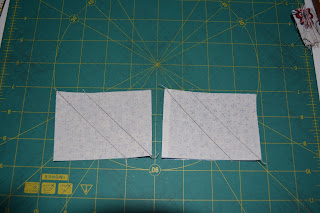 Sew on the drawn lines, and then cut apart between them. Press the seams toward the darker fabric. Don't forget to trim away the little dog ears!
Arrange 3 half-square triangles with a 2 ½" background square and sew them together as shown. 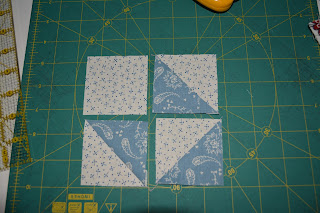 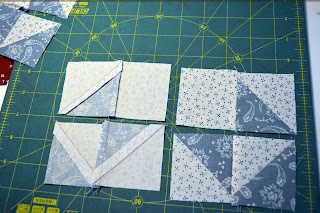 Press the seams in opposite directions, pressing the triangle unit toward the background square. Then sew the halves together.

For the large star points, I use the technique of sewing diagonally across a square, then folding the triangle back on itself. Many people draw a line to follow, but I have developed a technique whereby you do not need to draw that line; I draw the line on my sewing machine. Just line up a ruler with the sewing machine needle (in the down position), square it up with the machine, and use a Sharpie marker to draw the line from the needle toward you. Then, by guiding the bottom corner of the small square along the drawn line, you have perfectly sewn diagonal lines. Make sure the top corner of the small square is right at the needle. 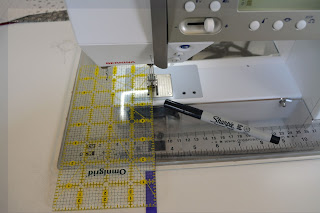 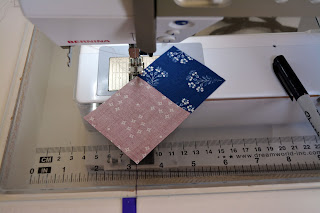 Sew the Sawtooth Square pieces on one end of the Large Star rectangles. Sew 4 units in one direction, then make sure to sew the other 4 in the opposite direction. I don't start sewing at the corner because my machine likes to eat those little points -- by starting on the other side, I avoid that! 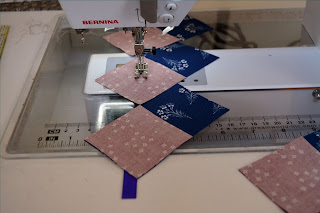 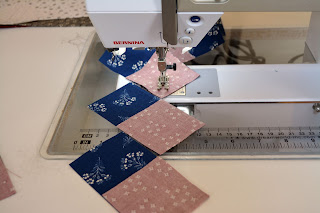 Sew these 4 in the opposite direction

You can chain piece these, but don't forget to use a scrap of fabric to lead on then lead off your stitching. This saves lots of thread and helps prevent those thread pileups that are so annoying! 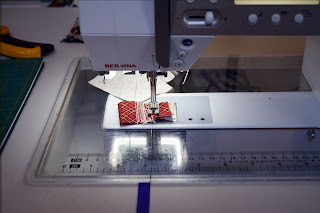 Trim away the triangles 1/4" from the seam. 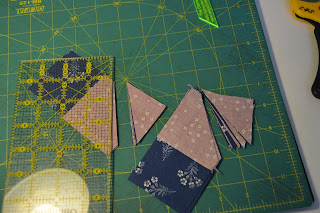 Press the seams as shown -- there is a reason for this which will become apparent when you sew the units together. Just follow the pictures below. 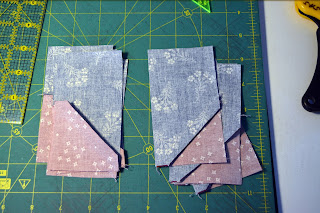 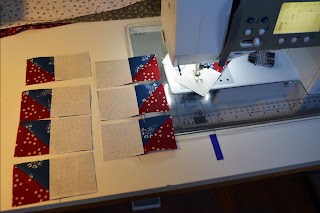 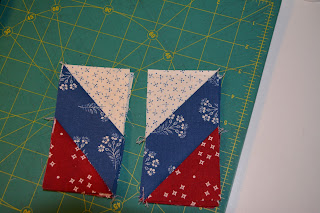 Sew pairs of units together like you see below. This is where the seams pressed in opposite directions will be very useful -- opposing seams will nest together beautifully and you'll get perfectly matched seams. 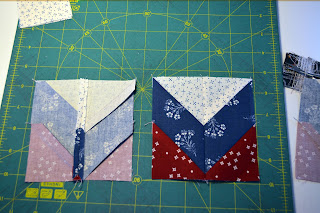 Arrange the corner units, the large star units, and the center square as shown and sew them together. 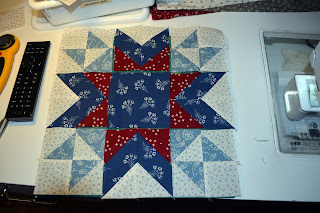 Here's a hint for making the seams match when you are sewing the corner unit and large star points together. Run the point of a seam ripper along the ridge formed by the seam on the bottom layer; where it stops is where the intersections should meet up. Keep the seam ripper on that intersection and as you sew, aim the needle toward the point of the ripper.  Don't sew over the ripper though, pull it away just before the needle gets there! 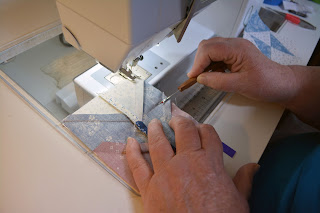 There you have it, a beautiful Wyoming Valley Star block!  I tried another one using the black and red fabrics; which combination is your favorite? 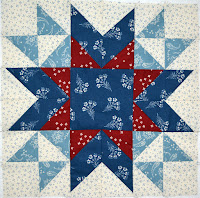 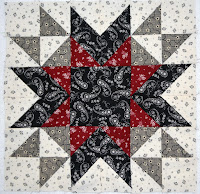 Don't forget to comment below and be sure that your e-mail address is included -- next week I'll pick one commenter to receive Savvy Sets for Scrappy Blocks and a Gizmo!